For every EV buyer aiming to loosen his fillings by snapping off lurid holeshots, there’s another out for maximum distance on a charge. Each choice demands separate methodologies for electric-drive components and battery management, so it’s logical for an automaker to offer products catering to one or the other. Recently, The Drive’s James Gilboy took the top-of-the-line 2021 Polestar 2 Performance, with its summer tires and adjustable Ohlins dampers, for a whirl. At the time, Polestar’s long-range models had not been released.

That’s changed with the new model year. Late last month, I journeyed to Santa Fe, New Mexico to try out a pair of pre-production models representing the Polestar 2 Long Range cars for 2022: a dual-motor (AWD) and the entry-level single motor (FWD). To Polestar’s credit, I got to test a straight-up base model (with only a special paint option at $1,200), so we’ve got the goods on the company’s most sensible, accessible product. 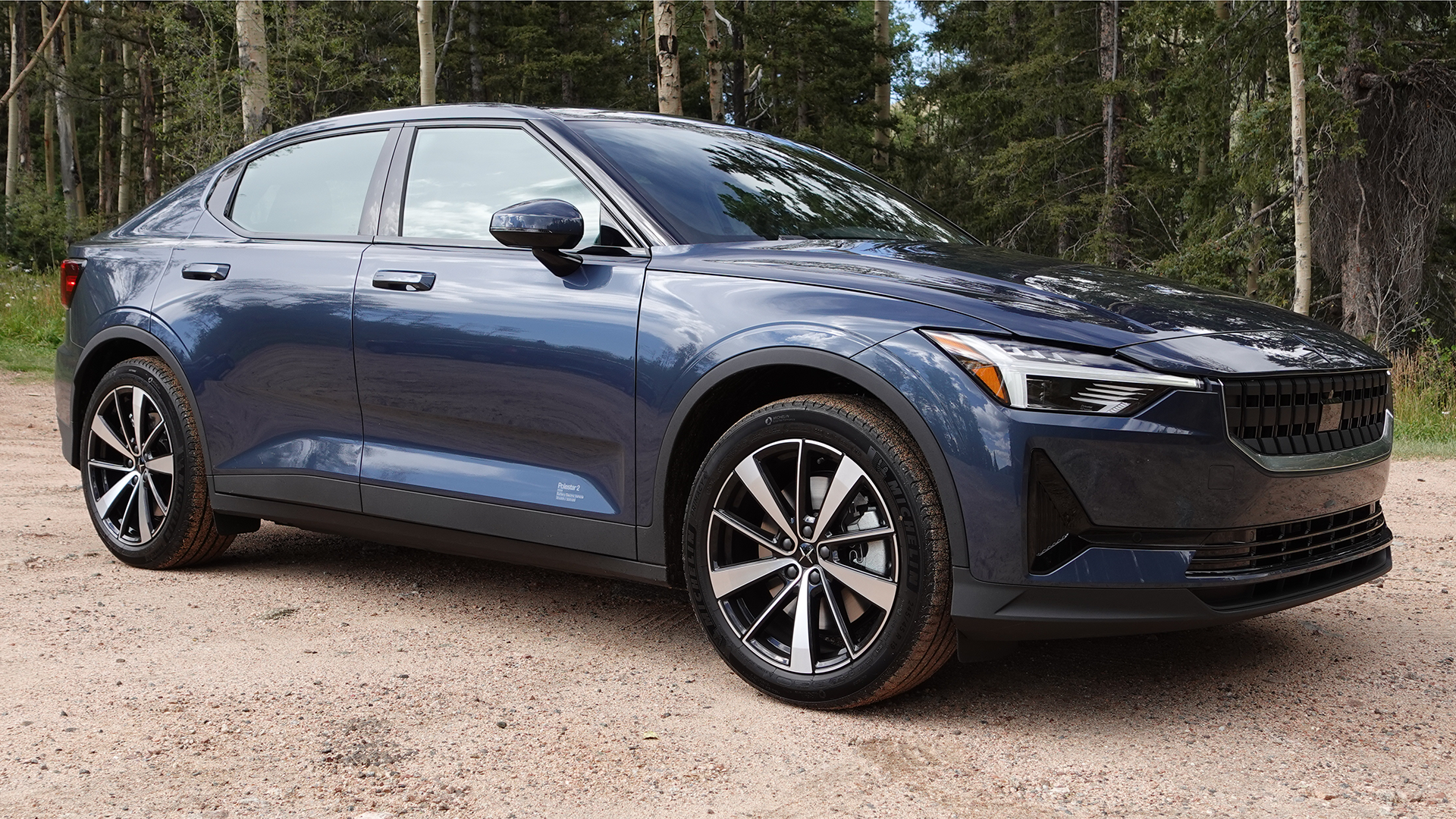 Are these the premium compact EVs for you? Let’s have a look.

2022 Polestar 2 Long Range By The Numbers

Polestar 2 is the brand’s first all-electric car. Once called Polestar Performance AB, Volvo’s motorsports development arm, it’s now a standalone car company and design and technology incubator owned by Volvo and its Chinese parent, Geely Auto Group. Its first car in production, the Polestar 1, is a high-performance hybrid coupe built in limited quantity. The Polestar 2 is a five-door EV hatchback built in China; the company’s next model, the Polestar 3 SUV, will also be built at a new plant in Ridgeville, South Carolina.

If you'd expected Polestar to disrupt Tesla’s energy loop and maneuver into the kill zone, you’ll be disappointed. Its strategy is to build square-shooting vehicles in an effort to win over internal-combustion buyers who relate to a low-key Scandinavian ethos, and perhaps are turned off by Tesla’s marketplace antics. We’ll see if that's a sustainable strategy, but with the financial muscle of its parent, Polestar has the breathing room to be circumspect; it's been building its team and strategy, getting its quality equation (and sales channels) dialed in, all while taking advantage of the tax-credits its cars still garner as a major selling point. This approach also means not engaging in aggressive moves like trading battery longevity for higher range numbers or joining in the acceleration-rate battle. Let’s take a closer look at the two newest models. 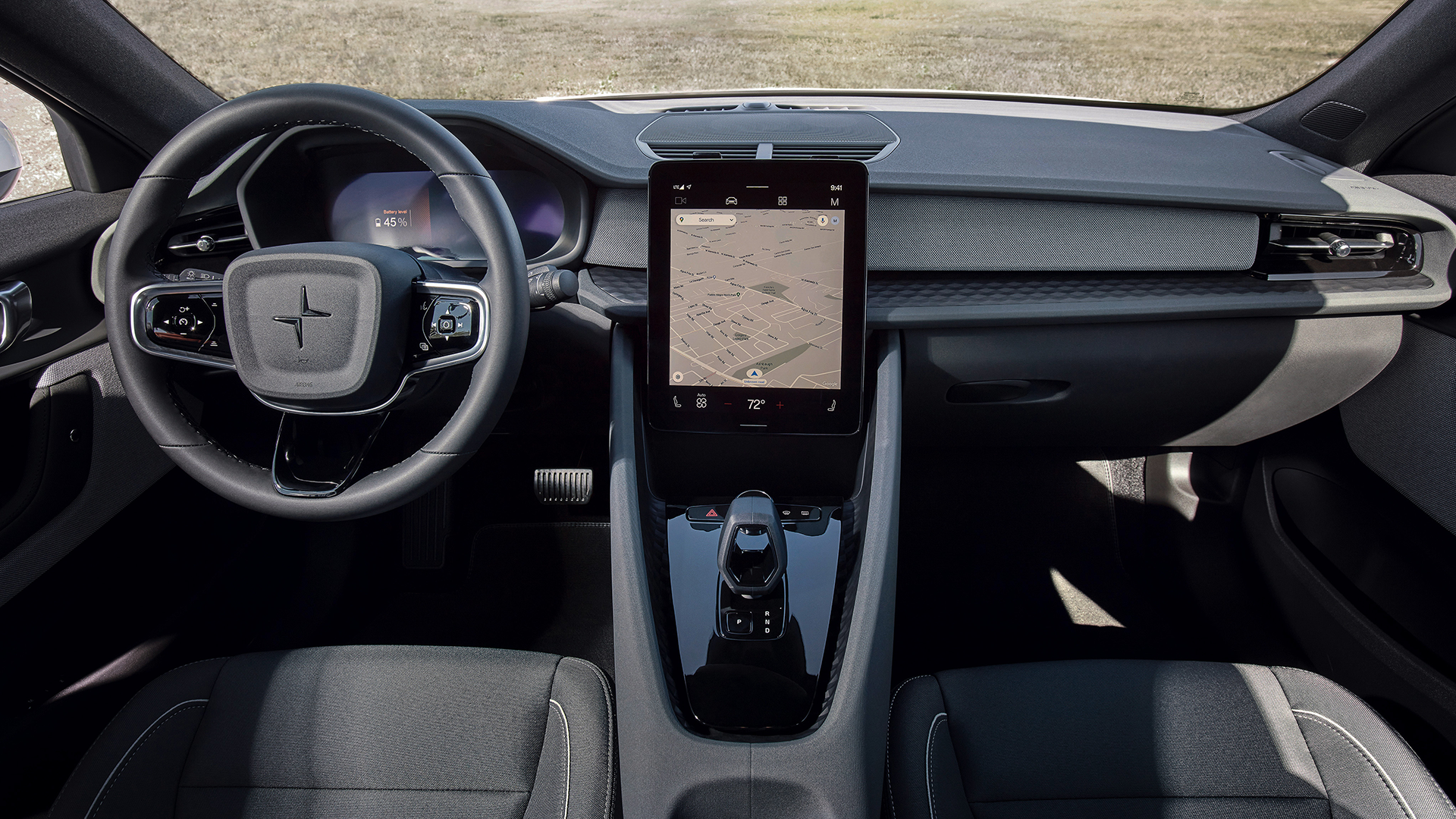 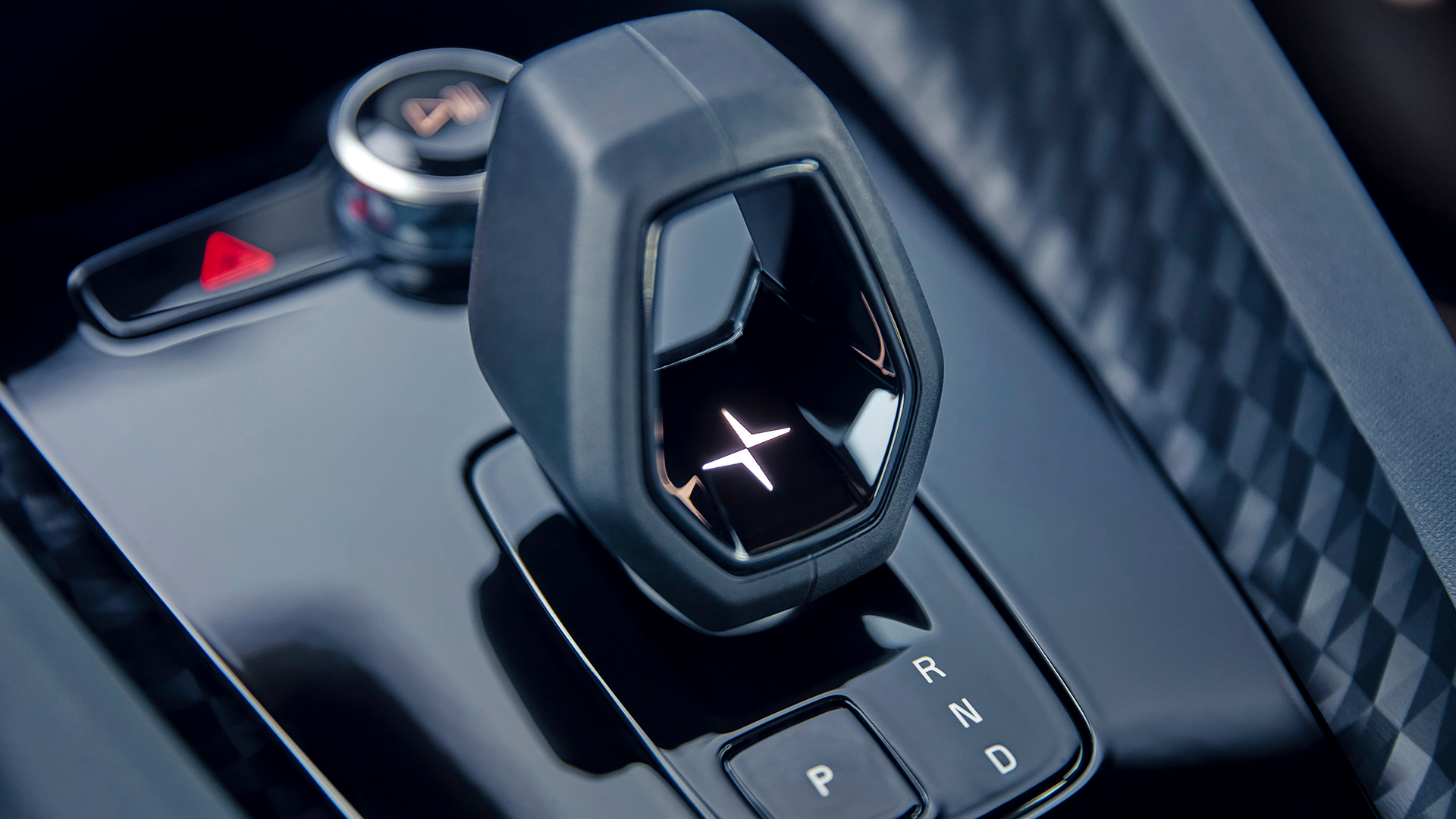 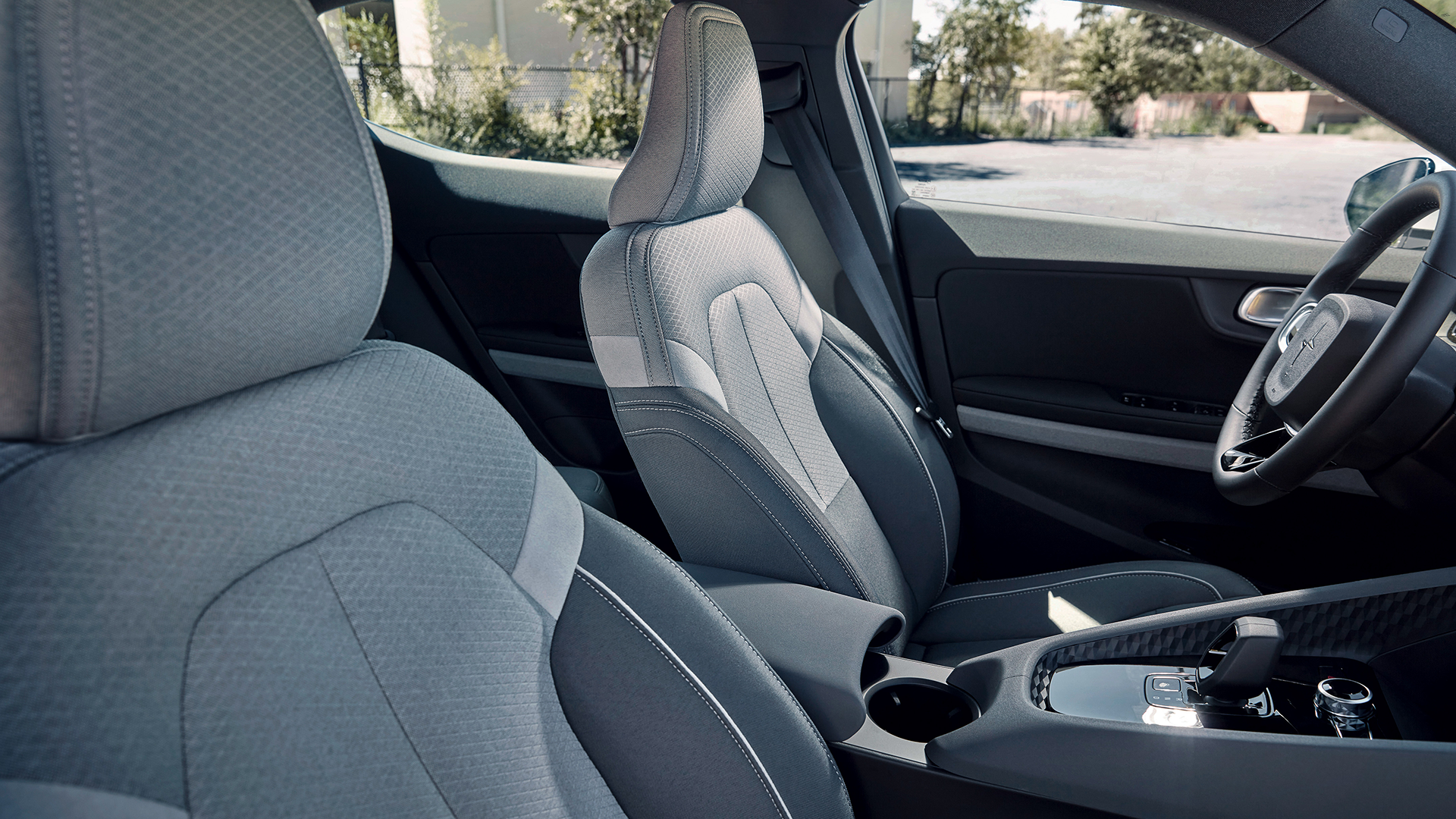 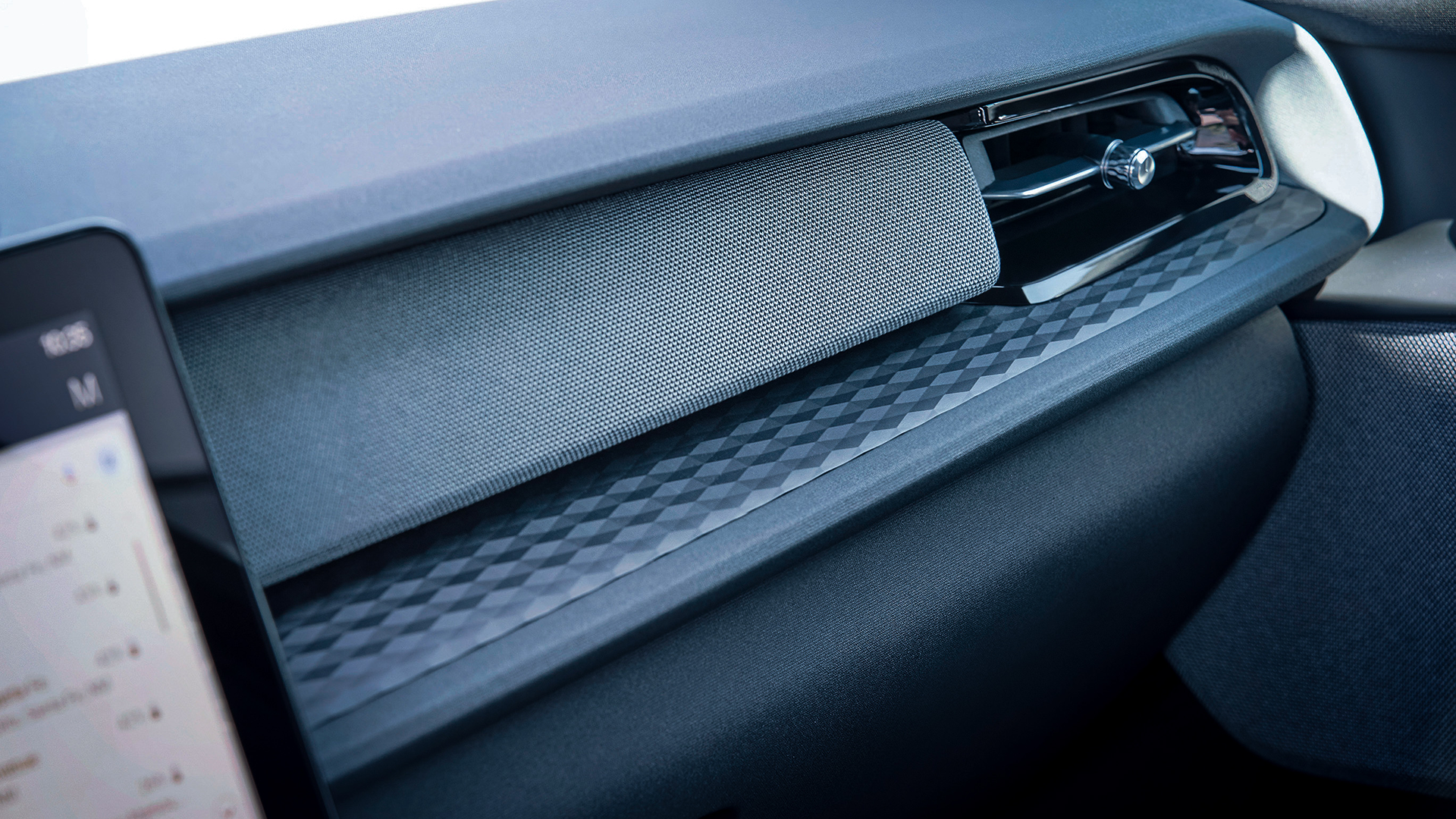 Just like the car Gilboy tested, these 2022 Polestar 2s go about their visual business with little theater, crisply tailored on the outside and modishly minimalist on the inside. The entry-level single-motor model swaps quickness for distance. Ditching the rear motor increases its EPA-estimated range from 249 miles to 265 miles, delays zero-to-60 time to 7.0 seconds (from 4.5 seconds), and drops the base price by four grand to $45,900 (plus $1,300 destination). With Polestar still well below the sales threshold for federal and state tax credits, a buyer in a state offering a couple grand in EV benefits, plus utility-led incentives, can push the relative price of a base car down into the mid-$30,000 range.

The big electron in the room, however, is one of semantics. That is, the tension between Polestar’s definition and the reality that 265 miles on a charge only qualifies as “long range” among its own vehicles and among other carmakers not named Tesla. An equivalent Model 3 Long Range books 353 miles on the EPA cycle. Putting aside the technical realities of managing battery longevity, the quirks of the EPA’s adjustment factor system, and any other product-marketing considerations, Polestar’s got quite a needle to thread among potential customers who look quizzically at the spec sheet. 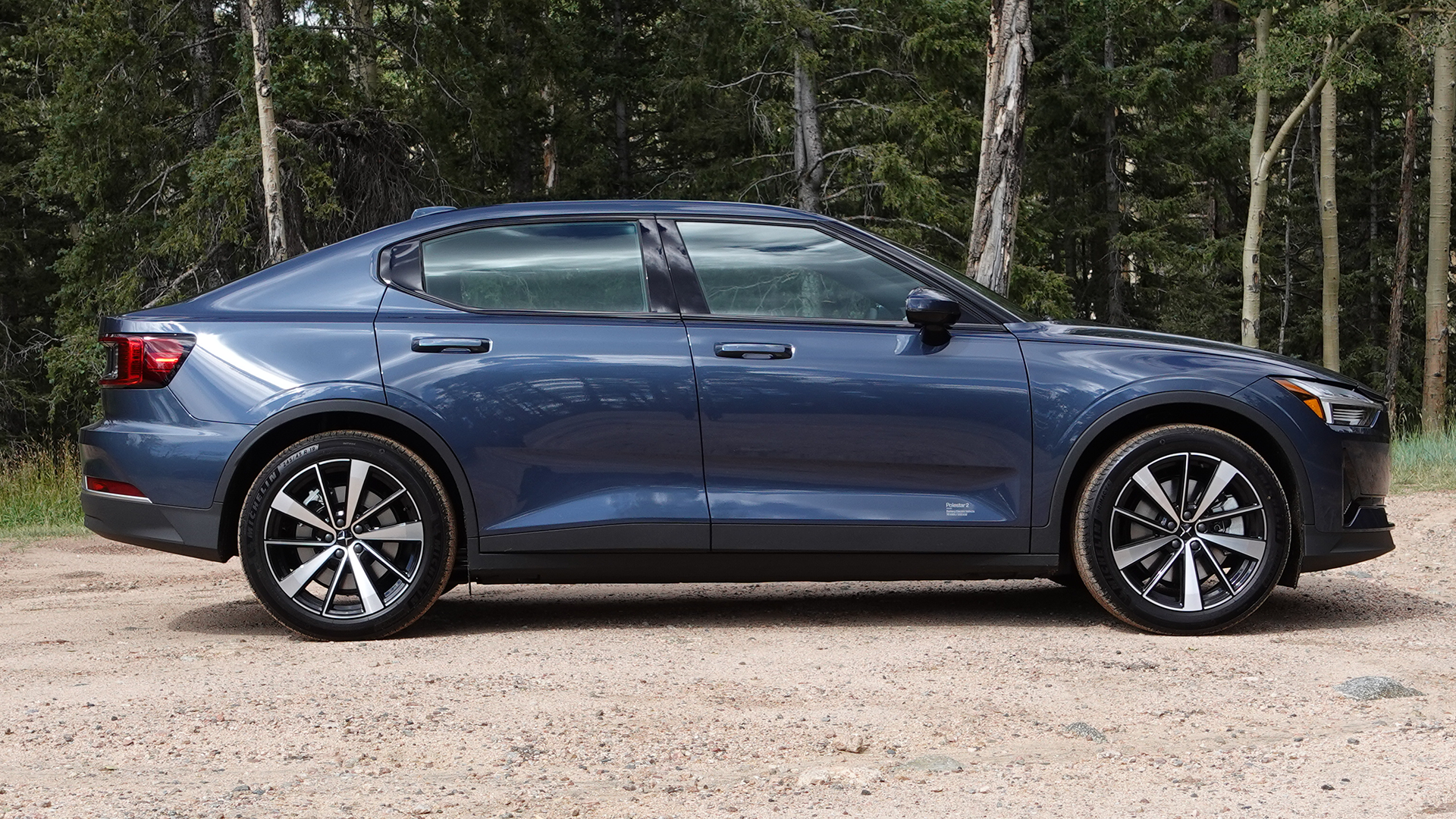 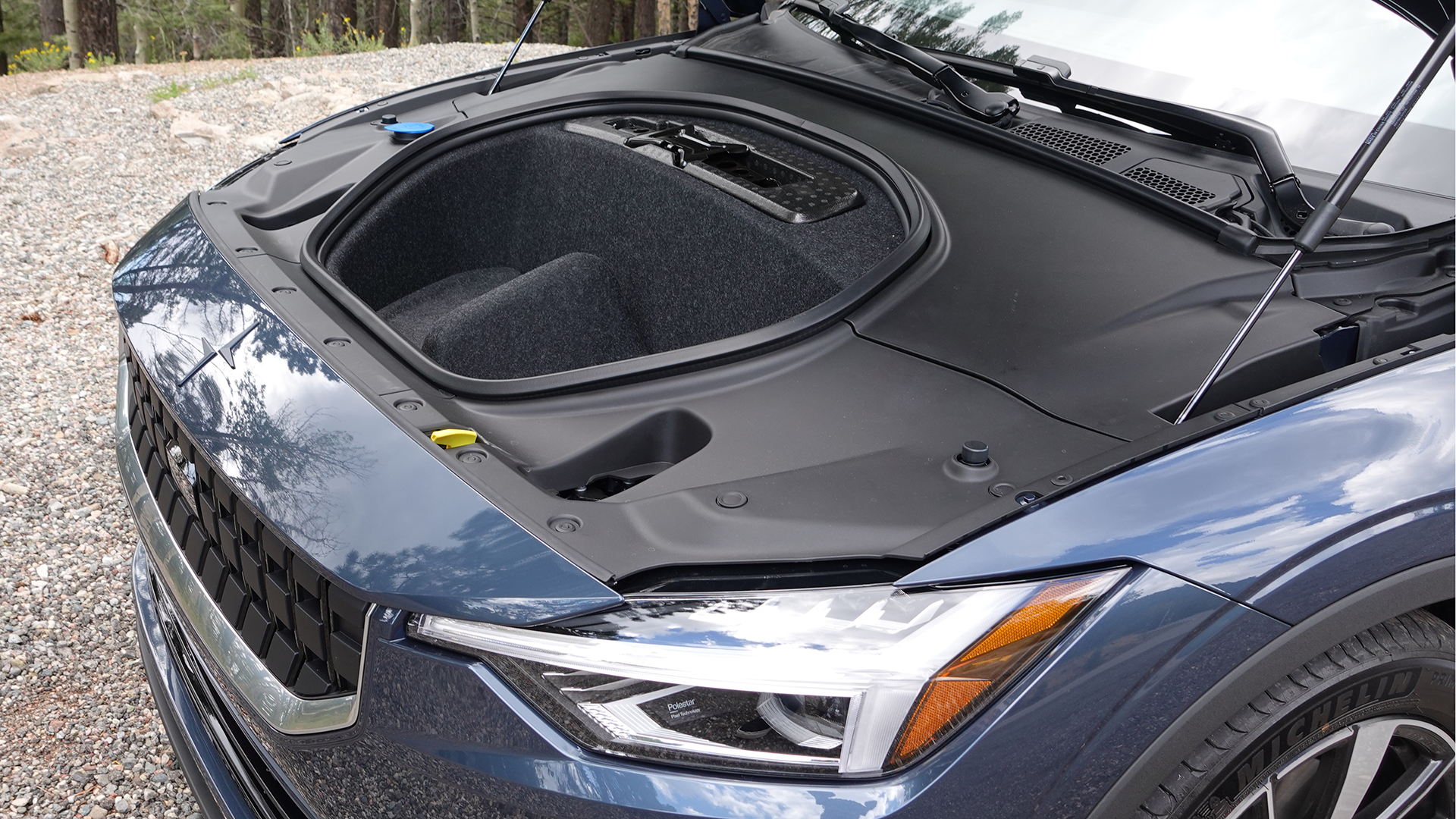 Mike Spinelli
The smallish "frunk" of the 2022 Polestar 2.

Performance is another matter. The Polestar 2 single motor gets a shorter planetary reduction gear ratio (10:51.1) for acceleration support; the dual motor gets a taller 8:57 ratio. Not surprisingly the dual-motor model enjoys a close-to-balanced weight distribution of 51:49 front/rear; the single-motor cars are slightly front-heavy at 55:45. For that extra $4,000, a dual-motor buyer gets a boost in horsepower to 402 and torque to 487 lb-ft, dropping the zero-to-60 time to 4.5 seconds and its EPA range to 249 miles. Considering the single-motor model, are 16 extra miles on a charge worth such a substantial drop in performance? It depends on what your priorities are, and how far you live from the local Costco. If I had to bet, I'd say the single motor will get buyers in the door, but most will scribble their name down for a dual-motor model.

I got a taste of both single- and dual-motor models on separate drive routes during a one-day test. The single-motor route traced 86.2 miles from downtown Santa Fe, along the stunning landscapes of the Jemez Mountains, winding past Frijoles Canyon and the Jemez Springs, along State Route 4 to the Los Alamos History Museum and back via Route 502 and its sprawling vistas of the Sangre de Cristo Mountains. A separate route for the dual-motor model went 31 miles up Highway 475 into the Santa Fe National Forest, to an elevation of 10,350 feet, and back to downtown Santa Fe. 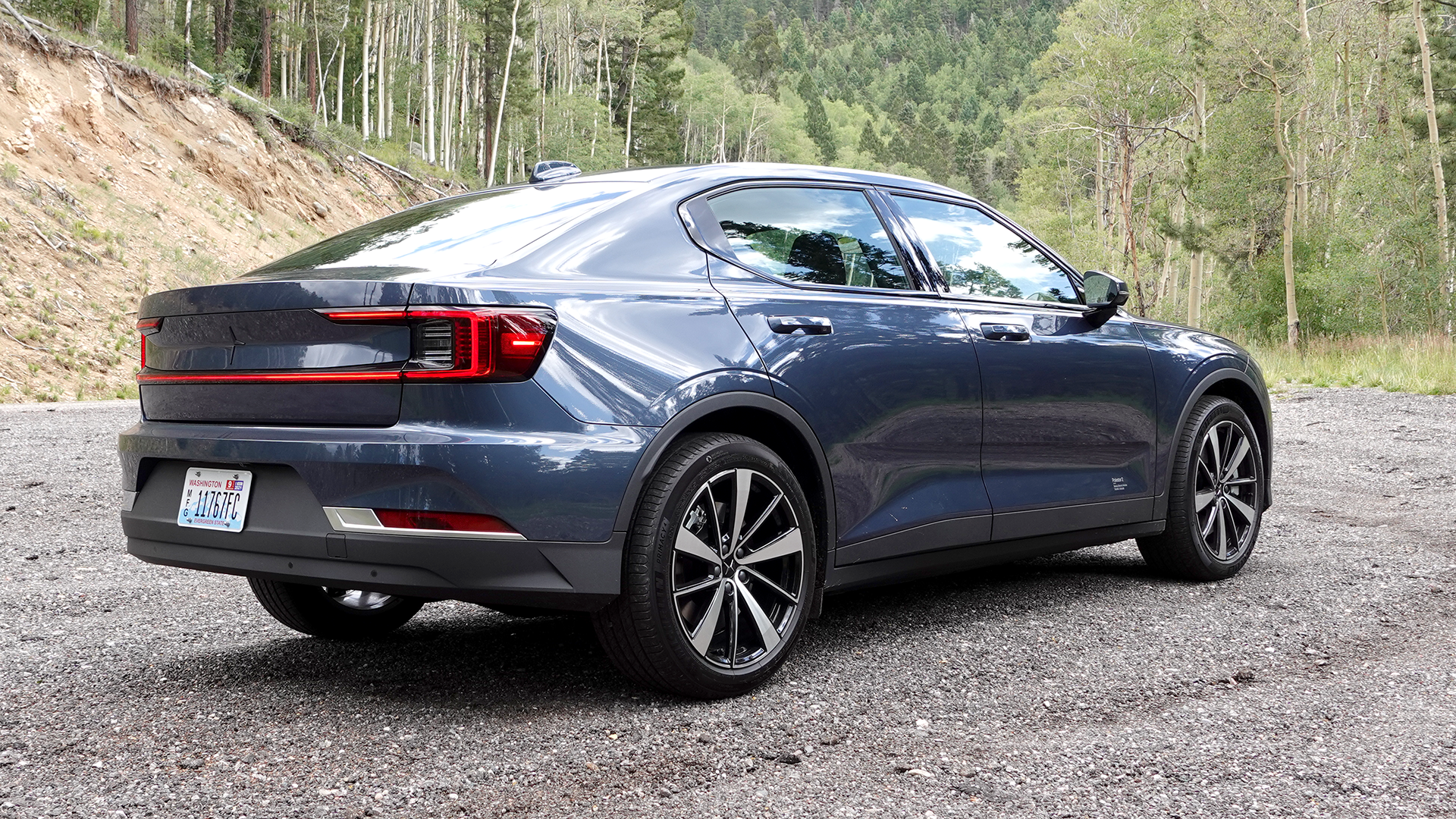 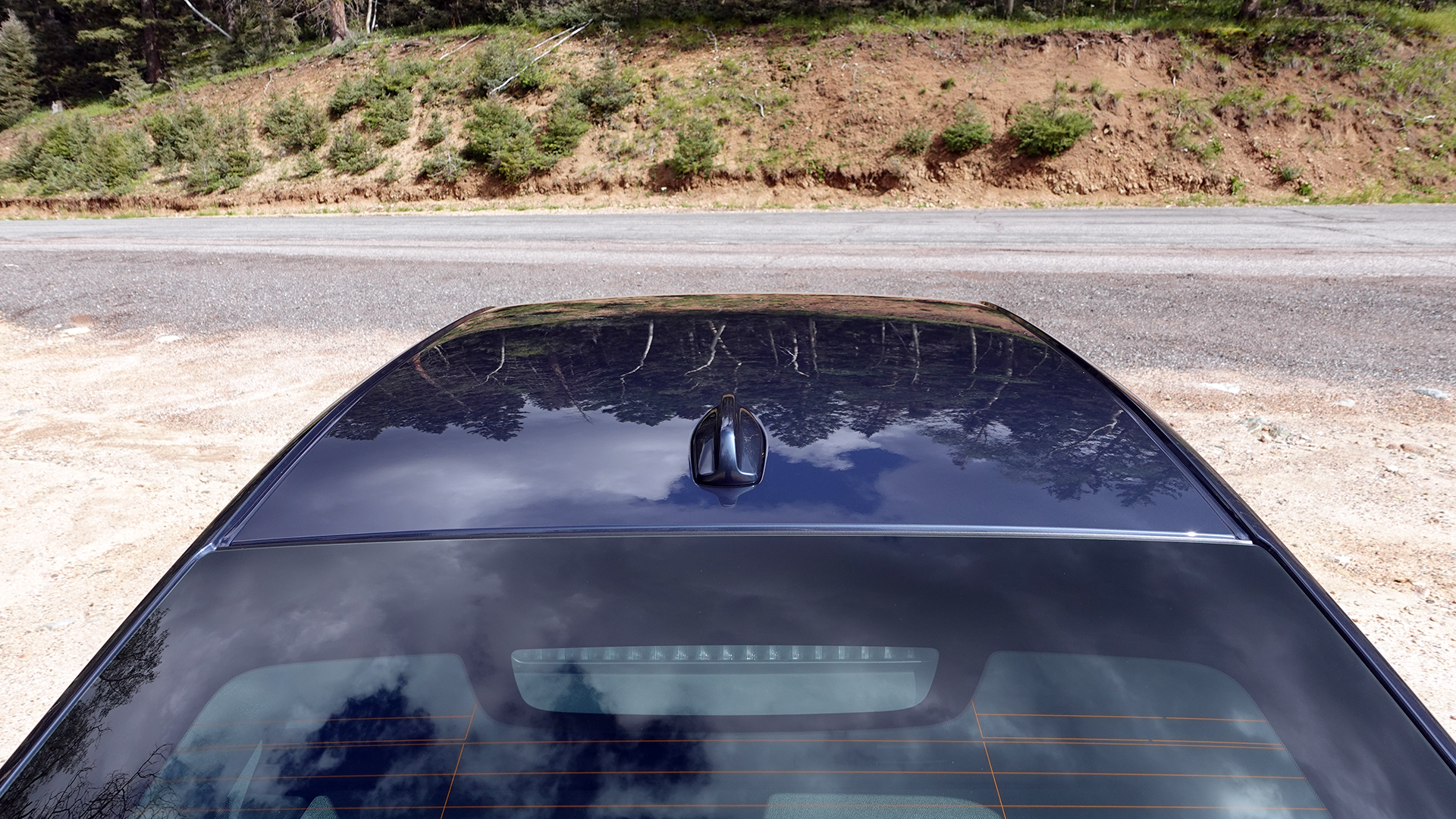 Mike Spinelli
The base-model Polestar 2 gets a metal roof, not the panoramic moonroof.

It’s no secret why Polestar chose these up-and-down routes. Both highlighted how irrelevant changes in altitude are to battery EVs; naturally aspirated ICEs can suffer power loss of 3-5 percent for every 1,000 feet of altitude gained, while EVs suffer none. Not to mention, both routes provided a palpable demo of battery regeneration. Maxing out pedal-off resistance, we returned from the apex of both routes having restored a non-scientific estimate of 60 percent of the charge we used getting up. We’ll get a better feel for the cars’ range when we procure one for real-world testing later this year.

Regarding range, new for 2022 is a mechanical heat pump, available with the Plus Pack, which captures ambient and drivetrain heat, and reduces battery draw for cabin heating. Polestar says at an exterior temperature of 40 to 60 degrees F, the heat pump can increase range by up to 10 percent.

Thanks to typical EV power delivery, the single-motor car doesn't feel exceedingly slow, especially in 50-80 mph highway pulls. It’s at this part of the speedo where the single-motor feels its sportiest, shrugging off the sluggishness with which it breaks inertia. Around town and on the highway, cruising among New Mexico's, er, by-the-book drivers, it can feel downright zippy. 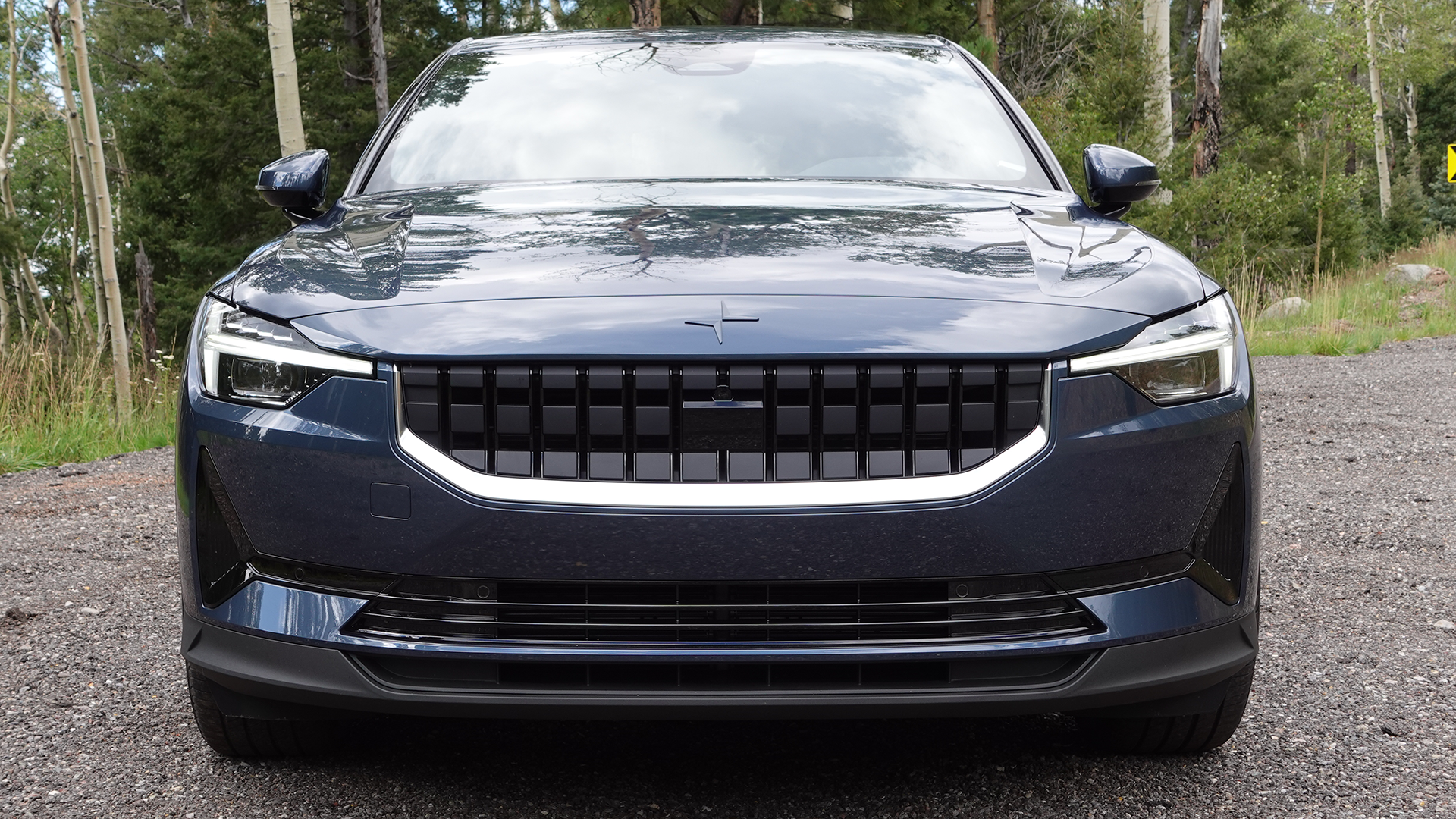 Road feel is where the Polestar 2 plants its flag. Driven in a measured way, the standard models comport themselves elegantly. Benefiting from a low center of gravity, the PS2’s front struts and rear multilink setup rein in the cars’ two-and-a-quarter-ton bulk, yielding relatively flat cornering and a comfortably taut yet supple ride quality. That tautness falls away as you push it toward the adhesion limits of the Michelin Primacy all-season tires and it rolls and pitches a bit, which is where the Performance Pack’s trick adjustable Ohlins would shine. Once, a pothole caused a slam against the bump stops so jarring I got out to check for damage, but found none. Shallower imperfections barely registered.

With simplicity a key tenet in the base Polestar 2's engineering, there are no power or suspension modes to futz with and no sporting pretensions. It feels petty, then, to criticize its steering as distant and its brake pedal as feelless, but these are the usual compromises for system efficiency and overall weight. That’s not to say the Polestar 2 isn’t some fun to drive. On winding B-roads it's easy to slip into a pleasant groove, if not a white-knuckled canyon sesh. 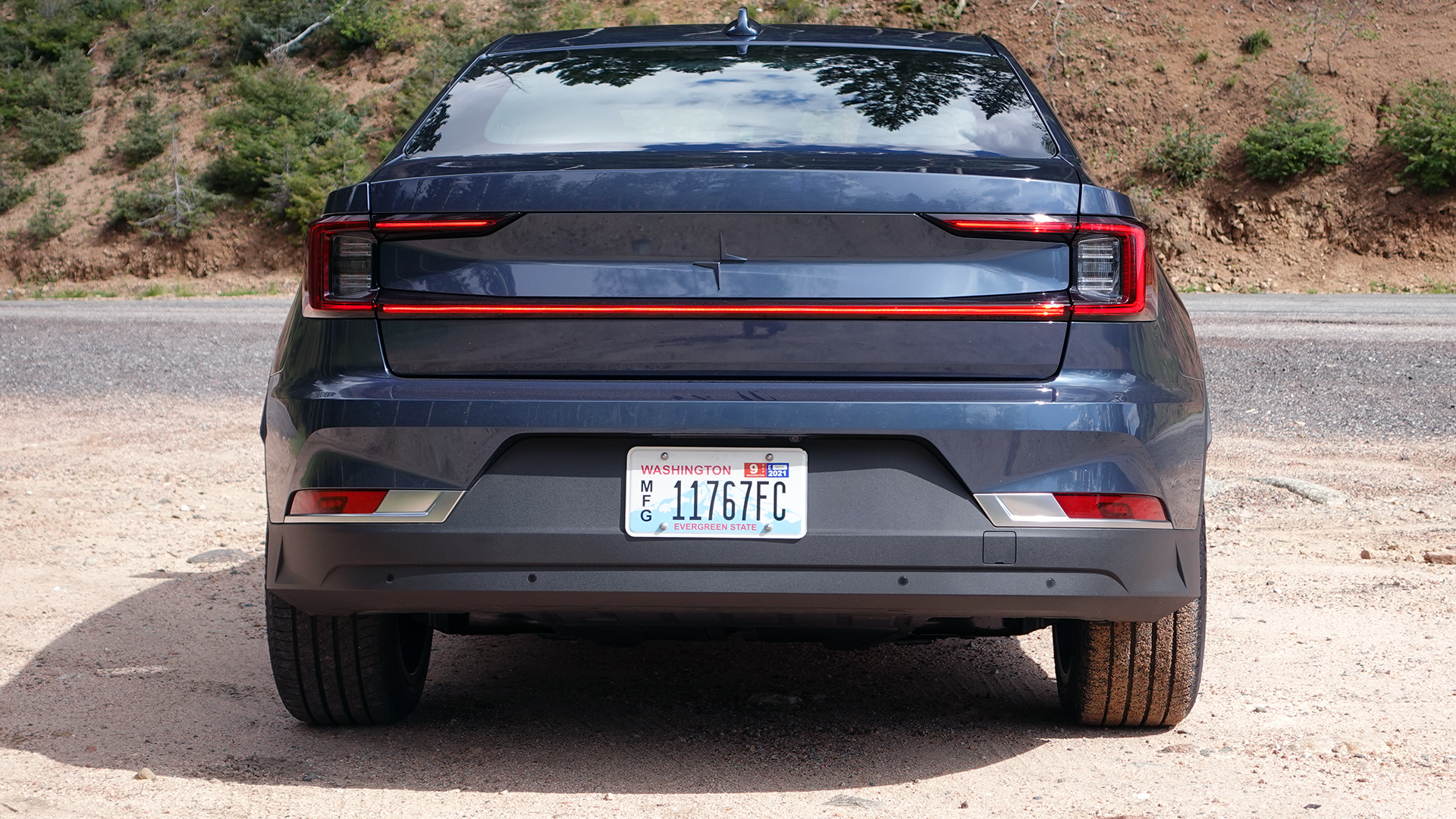 There are also few options to tailor the driving controls: three choices for steering weight (although I set it to medium and promptly forgot all other options) and three choices for single-pedal driving resistance. I played with all three settings, but while freewheeling with no resistance felt downright wasteful, setting it for medium felt like a half-measure. I ended up keeping regen braking on its most aggressive setting and enjoying the game of maxing out the motor-generator and the novelty of imagining that the brake pedal broke off. 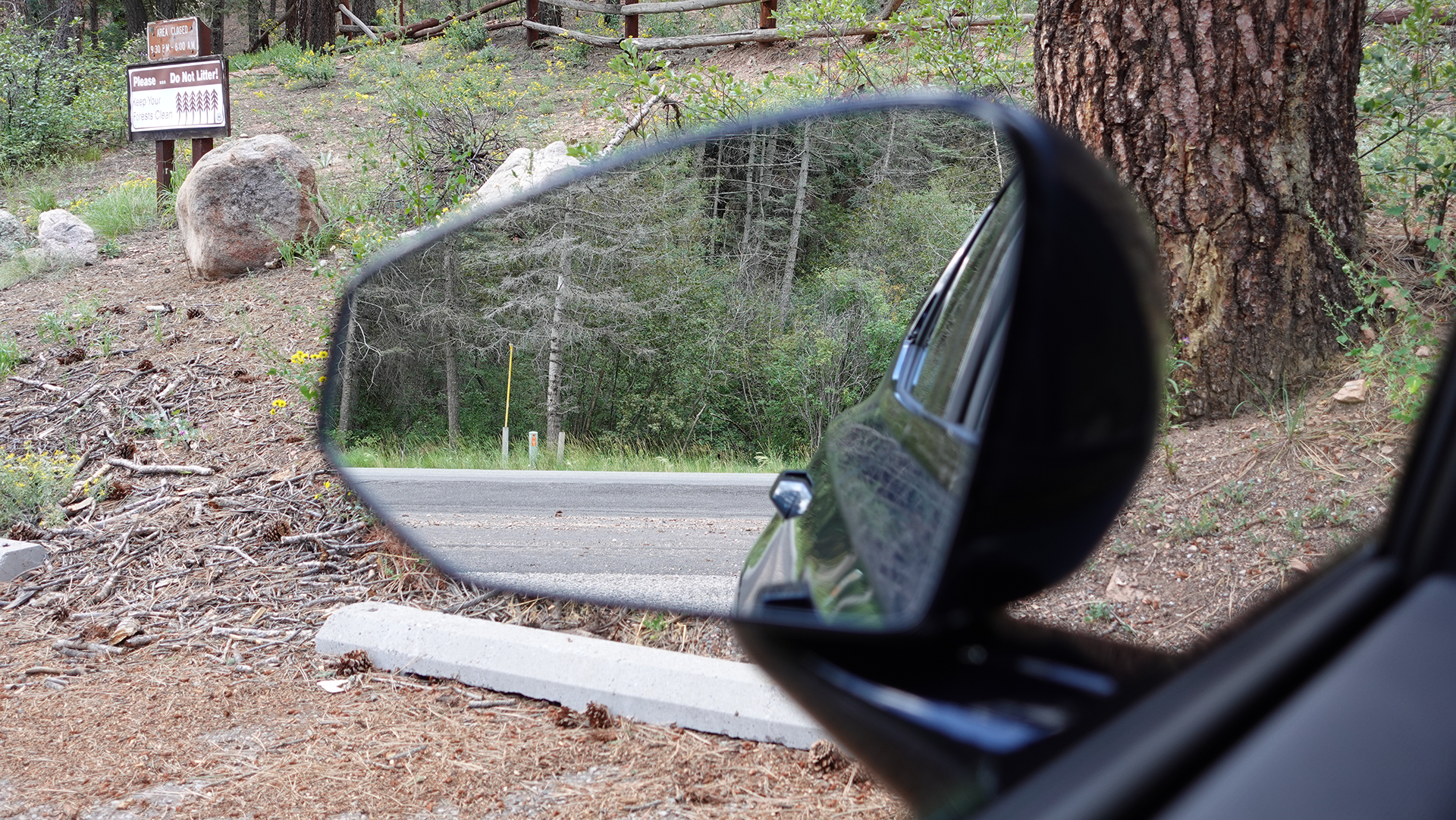 What About The Other Stuff?

The Polestar 2 is strikingly handsome, with strong curb presence and visual personalty. Passersby want to know what it is, which is more than you can say for the clutter of fussy designs in other automakers' stables. New for 2022 is a 3-D etched decorative fabric that adds a bit of visual depth to the accents. It's a way for designers to introduce new textures without disturbing the minimalist vibe. Either way, I'm still a huge fan of the vintage-style vents, which haven't changed with the model year. Rimless side-view mirrors, designed to decrease drag, are a classy touch.

With an intuitive digital dash binnacle and a portrait-oriented console screen that assembles information into easy-to-use quadrants, the UX/UI is clean, intuitive, and responsive. The embedded Google system made me almost forget to wish they'd already rolled out the Apple Car Play implementation coming later this year. Using the Google Assistant's well-developed natural-language commands for navigation and climate controls did made me wish the system was more deeply embedded into the car's control systems. Naturally, there are safety and security issues to that level of integration, but it felt like it should be there, which you might say is a testament to how well the system works. 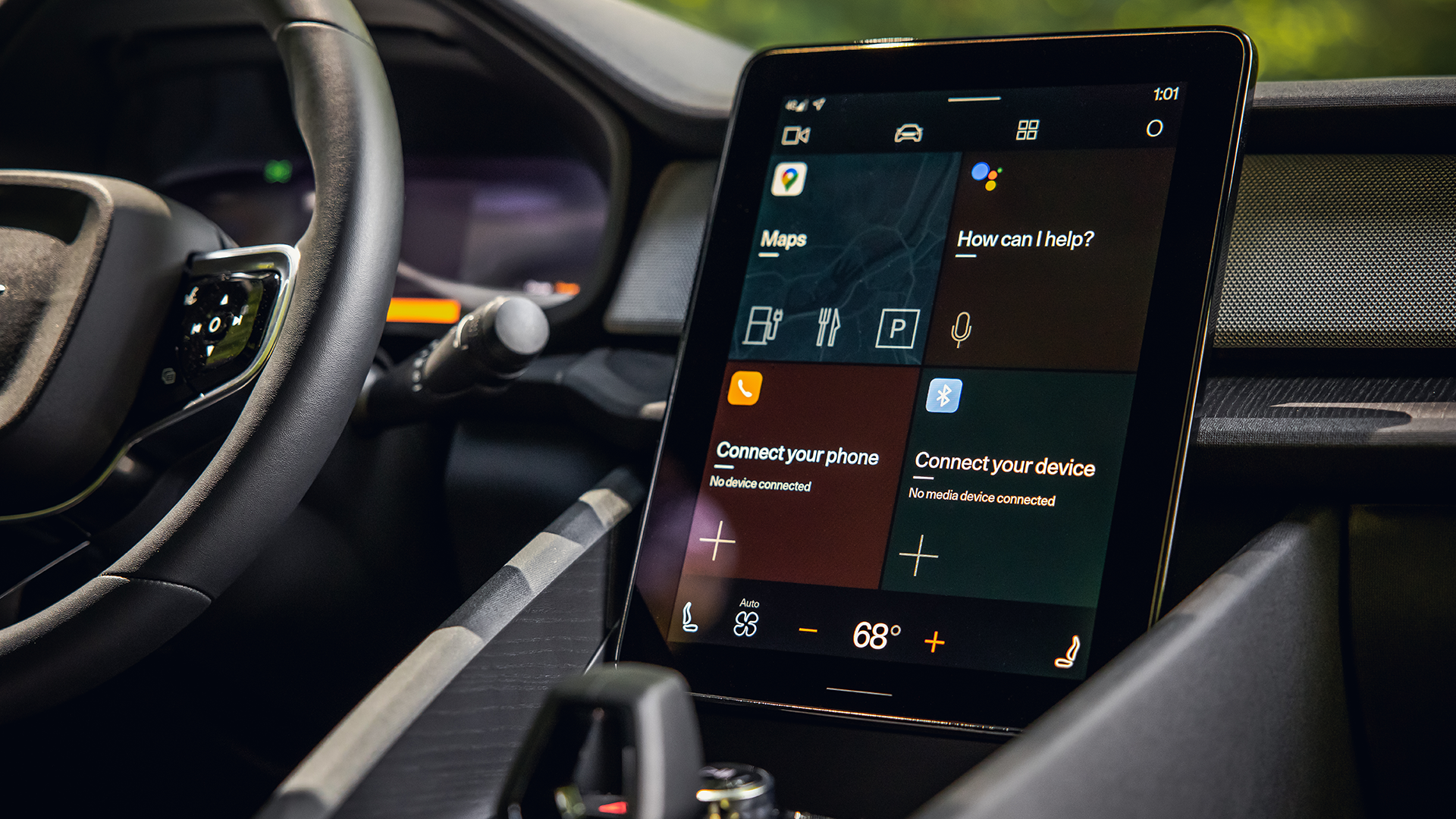 In terms of infotainment, one drawback to the base model is not getting the phenomenal 13-speaker, 600-watt Harman Kardon sound system, which is included with the $4,000 Plus package. I'm not saying the base system is a penalty, but a savvy salesperson need only play the two systems for customers back to back, and ka-ching.

No doubt, at some point Polestar will have to start jamming Freemont’s plans if it wants to compete on volume. Until then, the Polestar 2 can just be what it is: a reasonable, usable, value-packed premium EV choice, if not a point-for-point (or point-to-point) alternative to the Tesla Model 3.

Got a tip? Send us a note: tips@thedrive.com